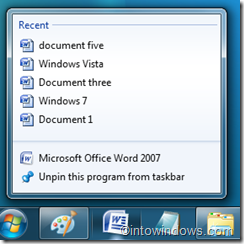 If you are new to Windows 7, Jump Lists are lists of recent items, such as files, folders, or websites, organized by the program that you use to open them. In addition to being able to open recent items using a Jump List, you can also pin favorites to a Jump List, so you can quickly get to the items that you use every day.

Since this feature was not available in earlier version of Windows, you need to get used to it. However, if you don’t like the new Windows 7 feature, you can disable it by following the below steps:

Turn on or off Jump Lists in Windows 7

1. Right-click on the taskbar and select “Properties”.

3. Deselect the option named “Store and display recently opened items in the Start menu and the taskbar” to disable Jump Lists feature.

4. Click on the “Apply” button to save the changes.

5. Recheck the box to enable the same feature.

If you own a Windows 10 PC, refer to our how to enable or disable Jump Lists in Windows 10 guide.